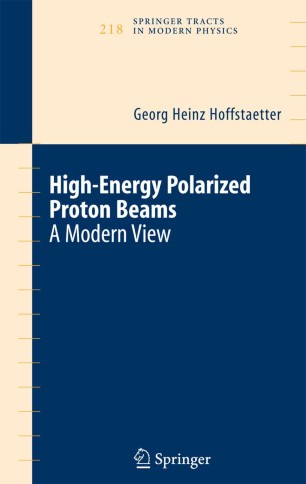 This monograph begins with a review of the basic equations of spin motion in particle accelerators. It then reviews how polarized protons can be accelerated to several tens of GeV using as examples the preaccelerators of HERA, a 6.3 km long cyclic accelerator at DESY / Hamburg. Such techniques have already been used at the AGS of BNL / New York, to accelerate polarized protons to 25 GeV. But for acceleration to energies of several hundred GeV as in RHIC, TEVATRON, HERA, LHC, or a VLHC, new problems can occur which can lead to a significantly diminished beam polarization. For these high energies, it is necessary to look in more detail at the spin motion, and for that the invariant spin field has proved to be a useful tool. This is already widely used for the description of high-energy electron beams that become polarized by the emission of spin-flip synchrotron radiation. It is shown that this field gives rise to an adiabatic invariant of spin-orbit motion and that it defines the maximum time average polarization available to a particle physics experiment. These concepts make it possible to optimize a high-energy accelerator for storing highly polarized beams. The utility of the invariant spin field is illustrated by simulations of spin motion in HERA and in other high-energy accelerators. Various methods for computing the invariant spin field, the adiabatic spin invariant, and the amplitude dependent spin tune are presented. Moreover, several high-energy spin-orbit dynamical effects will be discussed which go beyond conventional models of spin dynamics and were observed in simulations with these novel methods. The book is suitable for researchers of the field and for introducing students to this field of research.

The author teaches Physics at Cornell University and has specialized in the Physics of Beams and Accelerator Technology. He has worked in three internationally important facilities, the laboratory of elementary particle physics (LEPP) that operates the CESR e+/e- collider at Cornell University (New York State), the high energy physics laboratory DESY / Hamburg (Germany) that operates the HERA e/p collider and the nuclear physics facility NSCL / Michigan (USA). Together with colleagues from an international collaboration he has been analyzing the possibility of storing polarized protons at 920 GeV in HERA, a 6.3 km long high-energy accelerator in Hamburg, and in other large particle accelerators.