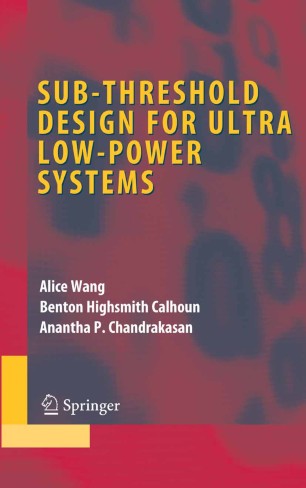 Although energy dissipation has improved with each new technology node, because SoCs are integrating tens of million devices on-chip, the energy ex­ pended per operation has become a critical consideration in digital and ana­ log integrated circuits. The focus of this book is sub-threshold circuit design, which involves scaling voltages below the device thresholds. In this region, the energy per operation cair be reduced by an order of magnitude compared to conventional operation but at the cost of circuit performance. In many emerging applications such as self-powered RFID, wireless sensors networks, and portable devices (PDAs, medical monitoring, etc. ), the overall battery life­ time is the primary design metric. Sub-threshold design can also be applied to burst mode applications (e. g. , a cell-phone processor) where the process spends a significant amount of time in the standby mode. The supply voltage can be reduced to the deep sub-threshold region, dramatically saving power in logic and memory. Extremely low-power design was first explored in the 1970s for the design of applications such as wristwatch and calculator circuits. Dr. Eric Vittoz pioneered the design and modeling of weak-inversion circuits. In this book, Eric provides his perspective on the evolution of sub-threshold circuit design. Dr. Eric Vittoz and Dr. Christian Enz introduce key models necessary for the design and optimization of weak inversion circuits. Design using weak inversion has been widely adopted in analog circuits, and Eric introduces the key design considerations.