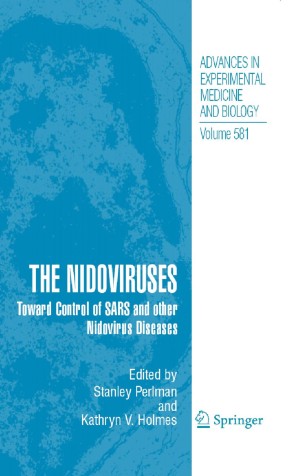 Toward Control of SARS and other Nidovirus Diseases

Part of the Advances in Experimental Medicine and Biology book series (AEMB, volume 581)

This book summarizes the keynote and plenary speeches and posters of the Xth International Nidovirus Symposium: Toward Control of SARS and Other Nidovirus Diseases” that was held in Colorado Springs, Colorado, June 25–30, 2005. The nine previous meetings of scientists investigating the molecular biology and pathogenesis of coronaviruses, toroviruses, arteriviruses, and okaviruses were generally held every 3 years since the first meeting was convened in Wurzburg, Germany, in October, 1980. The Xth International Symposium was held just 2 years after the IXth International Symposium (Nido2003) in The Netherlands, because of the tremendously increased research on nidoviruses that resulted from the discovery that the global epidemic of severe acute res- ratory syndrome (SARS) in 2002–2003 was caused by a newly discovered coronavirus called SARS-CoV. A record 225 scientists from 14 countries attended the Xth International Nidovirus Symposium, and important advances in every aspect of nidovirus molecular biology and pathogenesis were reported and discussed. The meeting was divided into 12 sessions, with keynote speakers providing a general review of research pertinent to each one. This volume is a collection of scientific papers presented at the symposium. Once a coronavirus was recognized as the etiological agent of SARS, intensive work by many investigators resulted in determination of the sequence of the virus, engineering of reverse genetics systems, and identification of the host cell receptor used by the virus. With the increased interest in coronaviruses, new members of the family associated with human disease were identified.