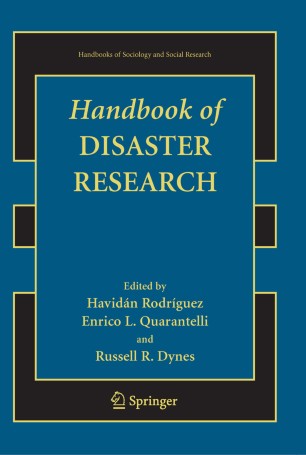 "The Handbook of Disaster Research will, without a doubt, be the most important publication of its type during this decade. Just about everyone who is anyone in the disaster research community has shared their knowledge on the important topics of the day. The authors and the publisher are to be congratulated for completing the book that will be widely sought after by practitioners, researchers and students of disaster planning and response. Thank you for this outstanding contribution to the field."

"The Handbook of Disaster Research will generate considerable excitement amongst international disaster research and management professionals. Finally, a volume that takes on the task of articulating and unpacking the many social complexities of modern disasters and catastrophes. By taking a multi-disciplinary perspective, the Handbook addresses the very pressing need to better understand the social dimensions of disaster. ... offers a very balanced set of analyses that will undoubtedly appeal to not only the researcher, but the practitioner and the policy-maker alike."

"This is an amazing handbook. .... A "must have" for anyone who wants to know the cutting edges of disaster research. The Handbook of Disaster Research is unlike any other handbook I’ve seen. .....I’m impressed, too, with the breadth of expertise that is represented. Practitioners as well as academics, the "old guard" of disaster research as well as the young, rising stars, and the refreshing appearance of scholars from places other than the United States. I need this book on my shelf."

Recent disasters, such as the Indian Ocean Tsunami, bomb explosions in London, Hurricane Katrina, the Pakistan Earthquake, floods in Central America, landslides in Indonesia, and September 11, 2001 among many others, have resulted in an extensive loss of life, social disruption, significant economic impacts to local and national economies, and have made headline news in countries throughout the world. Thus the Handbook of Disaster Research is a timely and much needed contribution to the field of disasters.