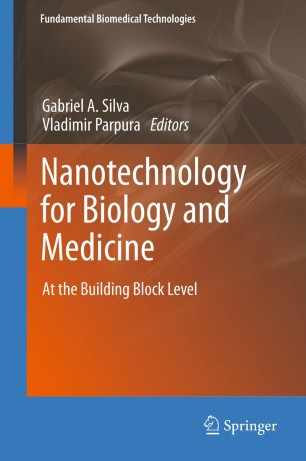 Nanotechnology for Biology and Medicine

At the Building Block Level

Nanotechnology for Biology and Medicine: At the Building Block Level introduces the reader to current cutting-edge approaches being pursued for the design and development of nanotechnology applications to different areas of biology and medicine. It discusses the key biological challenges at the molecular and cellular levels being faced by this new field, and some of the strategies being developed to address them. The specific topics covered include the extracellular environment and design of engineered matrices, synthetic patterning methods for biological applications, molecular motors and machines, atomic force microscopy methods for measuring nanoscale features, and the use of quantum dot and carbon nanotube nanotechnologies for imaging and interfacing with neural cells. It is intended to serve as an introduction to the field, while providing in-depth coverage for the more advanced reader.

Gabriel A. Silva, MSc, PhD is the Jacobs Faculty Fellows Professor of Bioengineering and an Associate Professor in the Departments of Bioengineering and Ophthalmology at the University of California, San Diego. He also is co-director of the Retina Engineering Center in the Institute of Engineering in Medicine. He is an affiliated faculty member in the Department of NanoEngineering, and a member of the Neurosciences Graduate Program, Computational Neurobiology Program, and Institute for Neural Computation. He received his Hon.B.Sc. and M.Sc. from the University of Toronto in 1996 and 1997, and a Ph.D. from the University of Illinois at Chicago in 2001. Dr. Silva completed a postdoc at Northwestern University in Chicago from 2001 to 2003, and  joined the faculty at the University of California, San Diego in 2004.