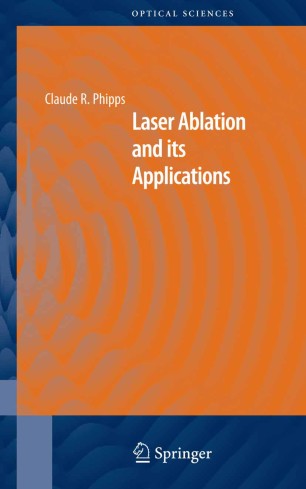 Laser Ablation and its Applications

Laser ablation describes the interaction of intense optical fields with matter, in which atoms are selectively driven off by thermal or nonthermal mechanisms.  The field of laser ablation physics is advancing so rapidly that its principal results are seen only in specialized journals and conferences. This is the first book that combines the most recent results in this rapidly advancing field with authoritative treatment of laser ablation and its applications, including the physics of high-power laser-matter interaction. Many practical applications exist, ranging from inertial confinement fusion to propulsion of aerostats for pollution monitoring to laser ignition of hypersonic engines to laser cleaning nanoscale contaminants in high-volume computer hard drive manufacture to direct observation of the electronic or dissociative states in atoms and molecules, to studying the properties of materials during 200kbar shocks developed in 200fs.

Selecting topics which are representative of such a broad field is difficult. Laser Ablation and its Applications emphasizes the wide range of these topics rather than - as is so often the case in advanced science – focusing on one specialty or discipline.  The book is divided into four sections: theory and modeling, ultrafast interactions, material processing and laser-matter interaction in novel regimes. The latter range from MALDI to ICF, SNOM’s and femtosecond nanosurgery to laser space propulsion.

The book arose from the SPIE series of High Power Laser Ablation Symposia which began in 1998. It is intended for a graduate course in laser interactions with plasmas and materials, but it should be accessible to anyone with a graduate degree in physics or engineering. It is also intended as a major reference work to familiarize scientists just entering the field with laser ablation and its applications.