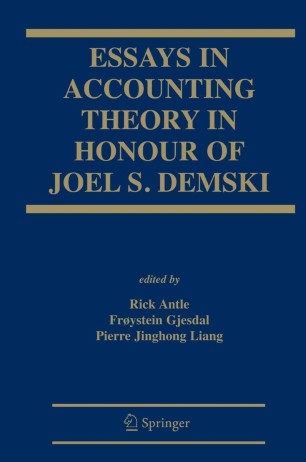 Essays in Accounting Theory in Honour of Joel S. Demski

Rick Antle is the William S. Beinecke Professor of Accounting at the Yale School of Management, where he was the Senior Associate Dean from 2000 to 2005.

Frøystein Gjesdal is a professor of Managerial Economics at Norwegian School of Economics and Business Administration (NHH) and is currently Head of the Department of Accounting, Auditing and Law.

Advancing understanding of accounting theory, this rigorous scholarly work focuses on the analysis of corporate accounting reports as a source of information used in corporate decision-making and in pricing securities by the capital market. Wide-ranging and important chapters cover such topical issues as: managerial compensation, corporate insider trading, real options, fair value accounting standards, procurement costing, and quantum information. The chapters illustrate the variety of both modeling and empirical methods for addressing issues involving incentives and information. The authors' unparalleled quality makes this book useful for both established and aspiring accounting scholars.

Froystein Gjesdal has a PhD in Business Administration from Stanford University (1979). He has been a Professor of Managerial Economics at the Norwegian School of Economics and Business Administration since 1979 (Full professor since 1986). Froystein Gjesdal is currently Head of the Department of Accounting, Auditing and Law. He has been an academic visitor at Stanford University, Yale University, London School of Economics as well as University of Florida.

Pierre Jinghong Liang has a PhD in Business Administration (Accounting) from University of Florida (1998). He has been a faculty member (with a title of Associate Professor since 2004) of Tepper School of Business, formerly known as Graduate School of Industrial Administration, at the Carnegie Mellon University located in Pittsburgh, Pennsylvania.