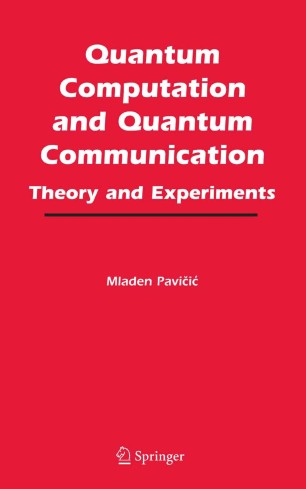 The field of quantum computing has experienced rapid development and many different experimental and theoretical groups have emerged worldwide.This book presents the key elements of quantum computation and communication theories and their implementation in an easy-to-read manner for readers coming from physics, mathematics and computer science backgrounds. Integrating both theoretical aspects and experimental verifications of developing quantum computers, the author explains why particular mathematical methods, physical models and realistic implementations might provide critical steps towards achieving the final goal - constructing quantum computers and quantum networks. The book serves as an excellent introduction for new researchers and also provides a useful review for specialists in the field.

"The author notes that the classical electronic components contained in the actual computers have actually attained the lower limit after which one enters a world dominated by quantum laws. … The book contains over 200 references, which contain the most important results from the literature. … The book is accessible and can be useful to physicists, mathematicians and engineers alike." (Gheorghe E. I. Draganescu, Mathematical Reviews, Issue 2007 b)

"The author intends to give an ‘interplay between mathematics and physics’, to ‘present those details that are used most often both in theory and experiment and to dispense with many inessential ones’. In fact, the demands to the reader are moderate such that the book can be suitable for a first contact with this field." (K. –E. Hellwig, Zentralblatt MATH, Vol. 1122 (24), 2007)

“Pavicic’s book achieves its own characteristic balance between the complementary attributes, depth and breadth, such that algorithmists and computation theorists will be reading both within and very much around their subject as that subject is conventionally construed. … The book will be valuable for researchers, and for neophytes who want to get the ‘flavor’ of quantum computing … .” (George Hacken, SIGACT News, Vol. 40 (4), 2009)
Buy options