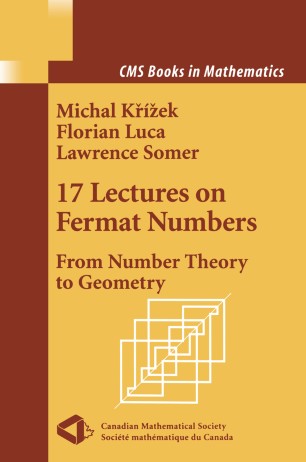 From Number Theory to Geometry

French mathematician Pierre de Fermat became most well known for his pioneering work in the area of number theory. His work with numbers has been attracting the attention of amateur and professional mathematicians for over 350 years. This book was written in honor of the 400th anniversary of his birth and is based on a series of lectures given by the authors. The purpose of this book is to provide readers with an overview of the many properties of Fermat numbers and to demonstrate their numerous appearances and applications in areas such as number theory, probability theory, geometry, and signal processing. This book introduces a general mathematical audience to basic mathematical ideas and algebraic methods connected with the Fermat numbers and will provide invaluable reading for the amateur and professional alike.
Michal Krizek is a senior researcher at the Mathematical Institute of the Academy of Sciences of the Czech Republic and Associate Professor in the Department of Mathematics and Physics at Charles University in Prague. Florian Luca is a researcher at the Mathematical Institute of the UNAM in Morelia, Mexico. Lawrence Somer is a Professor of Mathematics at The Catholic University of America in Washington, D. C.