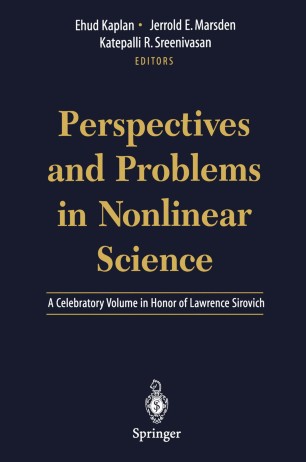 Perspectives and Problems in Nolinear Science

A Celebratory Volume in Honor of Lawrence Sirovich

Lawrence Sirovich will turn seventy on March 1, 2003. Larry's academic life of over 45 years at the Courant Institute, Brown University, Rockefeller University and the Mount Sinai School of Medicine has touched many peo­ ple and several disciplines, from fluid dynamics to brain theory. His con­ tributions to the kinetic theory of gases, methods of applied mathematics, theoretical fluid dynamics, hydrodynamic turbulence, the biophysics of vi­ sion and the dynamics of neuronal populations, represent the creative work of an outstanding scholar who was stimulated mostly by insatiable curios­ ity. As a scientist, Larry has consistently offered fresh outlooks on classical and difficult subjects, and moved into new fields effortlessly. He delights in what he knows and does, and sets no artificial boundaries to the range of his inquiry. Among the more than fifty or so Ph. D. students and post­ docs that he has mentored, many continue to make first-rate contributions themselves and hold academic positions in the US and elsewhere. Larry's scientific collaborators are numerous and distinguished. Those of us who have known him well will agree that Larry's charm, above all, is his taste, wit, and grace under fire. Larry has contributed immensely to mathematics publishing. He be­ gan his career with Springer by founding the Applied Mathematical Sci­ ences series together with Fritz John and Joe LaSalle some 30 years ago. Later he co-founded the Texts in Applied Mathematics series and more re­ cently the Interdisciplinary Applied Mathematics series.