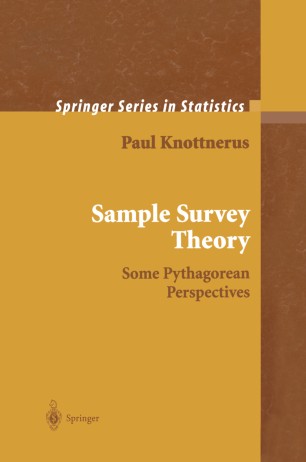 This volume deals primarily with the classical question of how to draw conclusions about the population mean of a variable, given a sample with observations on that variable. Another classical question is how to use prior knowledge of an economic or definitional relationship between the popu­ lation means of several variables, provided that the variables are observed in a sample. The present volume is a compilation of two discussion papers and some additional notes on these two basic questions. The discussion papers and notes were prepared for a 15-hour course at Statistics Nether­ lands in Voorburg in February 2000. The first discussion paper is entitled "A Memoir on Sampling and Rho, the Generalized Intrasample Correlation Coefficient" (1999). It describes a new approach to the problem of unequal probability sampling. The second discussion paper "The General Restric­ tion Estimator" (2000), deals with the problem of how to find constrained estimators that obey a given set of restrictions imposed on the parameters to be estimated. Parts I and II of the volume provide a novel and systematic treatment of sampling theory considered from the angle of the sampling autocorrelation coefficient p (rho). The same concept plays an important role in the analysis of time series. Although this concept is also well known in sampling theory, for instance in cluster sampling and systematic sampling, generalizations of p for an arbitrary sampling design are to my knowledge not readily found in the literature.