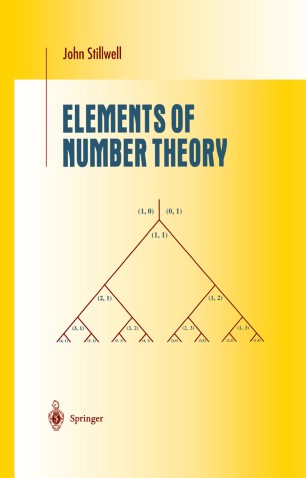 This book is a concise introduction to number theory and some related algebra, with an emphasis on solving equations in integers. Finding integer solutions led to two fundamental ideas of number theory in ancient times - the Euclidean algorithm and unique prime factorization - and in modern times to two fundamental ideas of algebra - rings and ideals.

The development of these ideas, and the transition from ancient to modern, is the main theme of the book. The historical development has been followed where it helps to motivate the introduction of new concepts, but modern proofs have been used where they are simpler, more natural, or more interesting. These include some that have not yet appeared in textbooks, such as a treatment of the Pell equation using Conway's theory of quadratic forms. Also, this is the only elementary number theory book that includes significant applications of ideal theory. It is clearly written, well illustrated, and supplied with carefully designed exercises, making it a pleasure to use as an undergraduate textbook or for independent study.

John Stillwell is Professor of Mathematics at the University of San Francisco. He is the author of several highly regarded books published by Springer-Verlag, including Mathematics and Its History (Second Edition 2001), Numbers and Geometry (1997) and Elements of Algebra (1994).