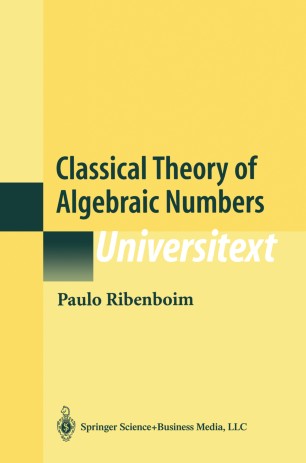 Gauss created the theory of binary quadratic forms in "Disquisitiones Arithmeticae" and Kummer invented ideals and the theory of cyclotomic fields in his attempt to prove Fermat's Last Theorem. These were the starting points for the theory of algebraic numbers, developed in the classical papers of Dedekind, Dirichlet, Eisenstein, Hermite and many others. This theory, enriched with more recent contributions, is of basic importance in the study of diophantine equations and arithmetic algebraic geometry, including methods in cryptography. This book has a clear and thorough exposition of the classical theory of algebraic numbers, and contains a large number of exercises as well as worked out numerical examples. The Introduction is a recapitulation of results about principal ideal domains, unique factorization domains and commutative fields. Part One is devoted to residue classes and quadratic residues. In Part Two one finds the study of algebraic integers, ideals, units, class numbers, the theory of decomposition, inertia and ramification of ideals. Part Three is devoted to Kummer's theory of cyclomatic fields, and includes Bernoulli numbers and the proof of Fermat's Last Theorem for regular prime exponents. Finally, in Part Four, the emphasis is on analytical methods and it includes Dinchlet's Theorem on primes in arithmetic progressions, the theorem of Chebotarev and class number formulas. A careful study of this book will provide a solid background to the learning of more recent topics.