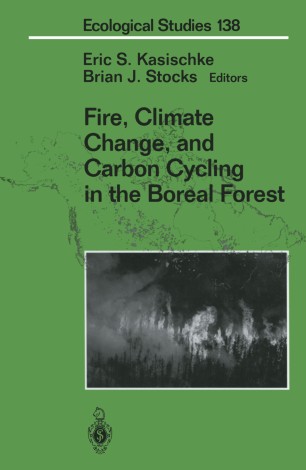 Fire, Climate Change, and Carbon Cycling in the Boreal Forest

In boreal forests, which contain large amounts of the world's terrestrial organic carbon, fire is a natural and fundamental disturbance regime essential in controlling many ecosystem processes. As a result of predicted climate change in the future, the fire regime and, consequently, the forest cover and carbon storage of boreal regions will undergo dramatic alterations. This volume discusses the direct and indirect mechanisms by which fire and climate interact to influence carbon cycling in North American boreal forests. The first section summarizes the information needed to understand and manage fire's effects on the ecology of boreal forests and its influence on global climate change issues. Following chapters discuss in detail the role of fire in the ecology of boreal forests. Subsequent sections present data sets on fire and the distribution of carbon, discuss the use of satellite imagery in monitoring these regions and discuss approaches to modeling the relevant processes. The book offers the following new results: improved estimates of carbon released during fires at a variety of scales, from individual sites to the entire North American boreal forest region; direct evidence of enhanced soil respiration after fire in Alaskan boreal forests; studies of the influence of fire on long-term forest-succession patterns; modeling results of the effects of climate warming on the fire regime; examples of the use of satellite imagery to monitor surface characteristics important in carbon cycling; modeling results of how climate change will interact with the fire regime to influence carbon storage.