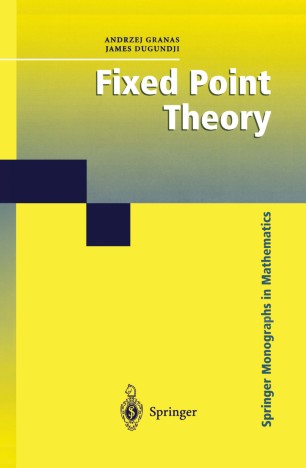 "Granas-Dugundji's book is an encyclopedic survey of the classical fixed point theory of continuous mappings (the work of Poincaré, Brouwer, Lefschetz-Hopf, Leray-Schauder) and all its various modern extensions. This is certainly the most learned book ever likely to be published on this subject."

"The theory of Fixed Points is one of the most powerful tools of modern mathematics. Not only is it used on a daily basis in pure and applied mathematics, but it also serves as a bridge between Analysis and Topology, and provides a very fruitful area of interaction between the two. This book contains a clear, detailed and well-organized presentation of the major results, together with an entertaining set of historical notes and an extensive bibliography describing further developments and applications."

"In this monograph, no effort has been spared, even to the smallest detail, be it mathematical, historical or bibliographical. In particular, the necessary background materials are generously provided for non-specialists. In fact, the book could even serve as an introduction to algebraic topology among others. It is certain that the book will be a standard work on Fixed Point Theory for many years to come."

This monograph gives a carefully worked out account of the most basic principles and applications of the theory of fixed points. Until now, a treatment of many of the discussed topics has been unavailable in book form. The presentation is self-contained and is accessible to a broad spectrum of readers. The main text is complemented by numerous exercises, detailed comments, and a comprehensive bibliography.

Andrzej Granas studied in Warsaw and then Moscow, where he earned his Ph.D. in 1958 under Lazar Lusternik. Since 1958, he has held various research and teaching posts in Poland, USA, Canada and elsewhere. During the Spring of 1970, he occupied a special chair at the Collège de France. In the early nineties, Dr. Granas founded and edited the journal Topological Methods of Nonlinear Analysis, and since 1992, he has served on the editorial board of the Zentralblatt. He is an Honorary Member of the Gdansk Scientific Society. The first part of this book is based on "Fixed Point Theory I" which was published by PWN, Warsaw in 1982. The second part follows the outline conceived by Andrzej Granas and the late James Dugundji.