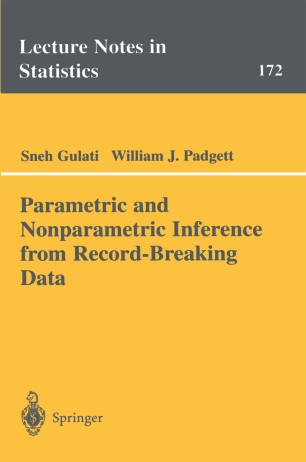 As statisticians, we are constantly trying to make inferences about the underlying population from which data are observed. This includes estimation and prediction about the underlying population parameters from both complete and incomplete data. Recently, methodology for estimation and prediction from incomplete data has been found useful for what is known as "record-breaking data," that is, data generated from setting new records. There has long been a keen interest in observing all kinds of records-in particular, sports records, financial records, flood records, and daily temperature records, to mention a few. The well-known Guinness Book of World Records is full of this kind of record information. As usual, beyond the general interest in knowing the last or current record value, the statistical problem of prediction of the next record based on past records has also been an important area of record research. Probabilistic and statistical models to describe behavior and make predictions from record-breaking data have been developed only within the last fifty or so years, with a relatively large amount of literature appearing on the subject in the last couple of decades. This book, written from a statistician's perspective, is not a compilation of "records," rather, it deals with the statistical issues of inference from a type of incomplete data, record-breaking data, observed as successive record values (maxima or minima) arising from a phenomenon or situation under study. Prediction is just one aspect of statistical inference based on observed record values.