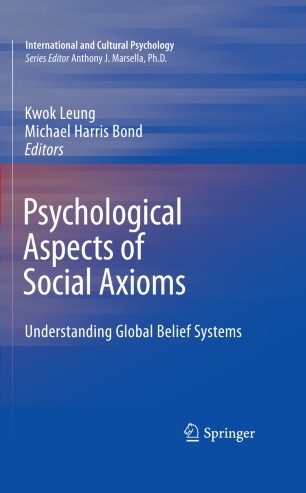 Positive and negative beliefs about human nature and the social world, the role of fate in life events, and the belief in the existence of a supreme being: social axioms as general beliefs exist both explicitly and implicitly in cultural values and traditions the world over. In Psychological Aspects of Social Axioms, an international team of researchers brings new depth to the study of these culture-bound belief systems as they inform interpersonal and organizational behavior, are passed from parents to children and sustained by social institutions, and contribute to both national character and individual personality.

The editors offer an insightful introduction to the social axiom framework and its basic issues, introducing studies from a variety of countries that explore the influence of these widespread beliefs as humans solve problems, pursue goals, and make sense of their lives.

A sampling of the topics:

With its groundbreaking constructs for intercultural understanding, Psychological Aspects of Social Axioms will find a wide and interested audience in cultural and clinical psychologists, cross-cultural trainers and educators. The book will also provide upper-level students in psychology and cultural studies with new directions for future research.

Kwok Leung is professor and Head of Management at City University of Hong Kong. He received his doctorate in social and organizational psychology at the University of Illinois. He is Deputy Editor-in-Chief of Journal of International Business Studies and senior editor of Management and Organization Review. His research areas include justice and conflict, cross-cultural psychology and research methods, and international business.

Michael Harris Bond is Professor of Psychology at the Chinese University of Hong Kong. He graduated from Stanford University, where he began his study of person perception, subsequently broadened to include research into the areas of justice, aggression, and impression management.