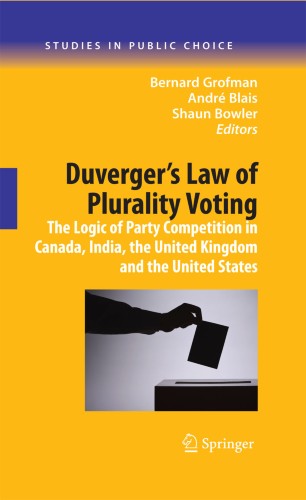 The Logic of Party Competition in Canada, India, the United Kingdom and the United States

Maurice Duverger is arguably the most distinguished French political scientist of the last century, but his major impact has been largely in the English-speaking world. His book, Political Parties, first translated into English in 1954, has influenced both the party politics literature (which continues to make use of his typology of party organization) and the electoral systems literature. His chief contributions there deal with what have come to be called in his honor Duverger's Law and Duverger's Hypothesis. The first argues that countries with the plurality rule will tend to become two-party systems; the second argues that countries using proportional representation (PR)  will tend to become multi-party systems. Duverger also identifies specific mechanisms that will produce these effects, conventionally referred to as "mechanical effects" and "psychological effects."

However, while Duverger's Hypothesis concerning the link between PR and multipartism is now widely accepted, the empirical evidence that plurality voting results in two-party systems is remarkably weak—with the U.S. the most notable exception. The chapters in this volume consider national-level evidence about Duverger's law in the world’s largest, longest-lived and most successful democracies of Britain, Canada, India and the United States. One set of chapters involves looking at the overall evidence for and against Duverger's Law in these countries; the other set deals with evidence about the mechanical and psychological effects predicted by Duverger. The result is an incisive analysis of electoral and party dynamics that will appeal to researchers, academics, students, policymakers, and policy watchers around the world.

Sponsored by the Center for the Study of Democracy, University of California, Irvine