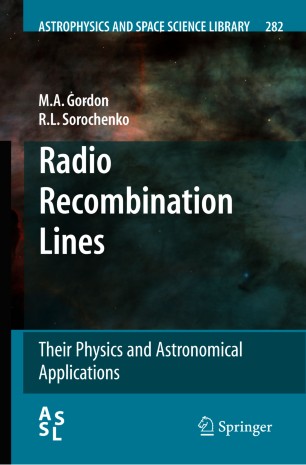 Their Physics and Astronomical Applications

Radio Recombination Lines is a comprehensive guide to the physics and observations of Radio Recombination Lines from astronomical sources. It includes the history of RRL detections, the astrophysics underlying their intensities and line shapes including topics like departures from LTE and Stark broadening, the maximum possible size of an atom, as well as detailed descriptions of the astronomical topics for which RRLs have proved to be effective tools. In addition, the appendix includes detailed physics underlying the Bohr atomic model, tables of RRL frequencies including fine structure components, techniques for calculating hydrogenic oscillator strengths, and formulas for converting telescope intensity units to astrophysical ones.

Radio Recombination Lines is written for astronomers and physicists. It is also suitable as a graduate-level textbook.  This softcover contains updates and corrections from the previous hardcover published in 2002.

"We now have a splendid book written by two of the pioneers, M.A. Gordon of the National Radio Astronomy Observatory in Tucson and R.L. Sorochenko of the Lebedev Institute. In their Preface the authors say that the book was written by exchanging email. They give a fascinating account of the history of the subject, a detailed discussion of the atomic physics required for the interpretation of the observations, and describe astronomical results obtained using RRL observations for a wide range of astronomical objects."