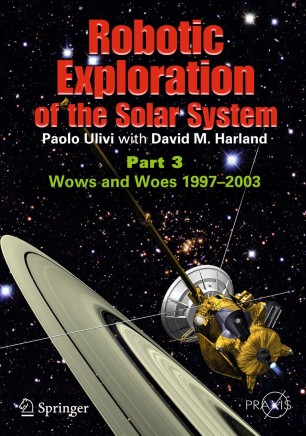 In Robotic Exploration of the Solar System, Paolo Ulivi and David Harland provide a comprehensive account of the design and managment of deep-space missions, the spacecraft involved - some flown, others not - their instruments, and their scientific results.

This third volume in the series covers launches in the period 1997 to 2003 and features:

- a chapter entirely devoted to the Cassini-Huygens mission to Saturn;

- coverage of planetary missions of the period, including the Deep Space 1 mission and the Stardust and Hayabusa sample returns from comets and asteroids;

The story will continue in Part 4.

Paolo Ulivi was born in Florence, Italy and graduated from the Politecnico di Milano University with a thesis on robotics for Mars sample return missions. He works as a consultant in aerospace structures in Toulouse, France. In his free time, he researches the history of astronautics, astronomy, aeronautics and the Cold War. He is also an amateur astronomer and specializes in Solar System observations.

David Harland studied astronomy to degree level, and pursued a career lecturing in computer science, and academic and industrial research. In 1995, David "retired" to resume his interest in spaec and started to write. He has over two dozen books published to date, a majority of them with Springer/Praxis and several others under contract. These days he considers himself to be an amateur hermit and a professional space historian.

Selected by Choice magazine as an "Outstanding Academic Title" for 2013

“Ulivi and Harland remedy this by providing rich, detailed overviews of Cassini, the Spirit and Opportunity rovers, and a number of less-well-known missions, such as Stardust. … The book features many illustrations, including images from the missions themselves, diagrams of the trajectories followed, and schematics of the spacecraft. … The book is well-researched and documented and is essential reading for anyone with an interest in the exploration of Earth’s solar system. … Summing Up: Essential. All space history collections.” (C. Palma, Choice, Vol. 50 (7), March, 2013)
Buy options