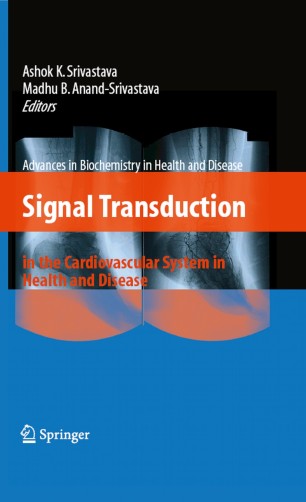 Signal Transduction in the Cardiovascular System in Health and Disease

Part of the Advances in Biochemistry in Health and Disease book series (ABHD, volume 3)

Signal Transduction in Cardiovascular System in Health and Disease

This book has addressed the contributions of several key signal transduction pathways which are central to our understanding of cardiovascular physiology and pathophysiology. Aberrations in these signaling events have been suggested to be involved in a host of cardiovascular pathologies, such as cardiac arrhythmias, congenital heart failure and hypertension.

All the chapters have been written by well known leaders in the fields, which cover a wide range of intracellular events that regulate various aspects of cardiovascular functions. This book will be of interest to both basic as well as clinical scientists seeking to understand the molecular basis of cardiovascular diseases, and also to those interested in defining targets for cardiovascular pharmacotherapy.

Dr. Madhu B. Anand-Srivastava is a Professor, Department of Physiology, and a member of the Group de recherche sur le système nerveux autonome, University of Montréal. In 1990, she received a prestigious Scientist Award from Medical Research Council of Canada and in 2004, she was bestowed with the Vincenzo Panagia Distinguished Lecturer award from the Institute of Cardiovascular Sciences of the University of Manitoba, Winnipeg. She is an internationally recognized expert in the area of G-protein and natriuretic peptide receptor-C signaling, and has made significant contributions in defining the role of Gia proteins in the pathogenesis of hypertension. She has published more than 125 papers in refereed journals and edited 3 books in the area of G-proteins, hypertension and NPR-C receptor and cell signaling, and has been invited to several National and International conferences and academic institutions to present her work. Dr. Anand-Srivastava has served or is currently on different committees of the Canadian Institutes of Health Research and Heart and Stroke Foundation of Canada, and is also on the editorial boards of several scientific publications, including the Journal of Molecular and Cellular Cardiology and Molecular and Cellular Biochemistry. She has also organized several National and International conferences on cell signaling in cardiovascular system.

Dr. Ashok K. Srivastava is a Professor at the Department of Medicine, Université de Montréal, and Head of the Laboratory of Cell Signaling at the Research Center of the Centre hospitalier de l’Université de Montréal (CHUM). He has over 100 publications in fields of insulin, vasoactive peptide and redox signaling, and cardiovascular complications. He has served or is serving as a guest editor of many journals such as Antioxidant and Redox Signaling, Canadian Journal of Physiology and Pharmacology, Cell Biochemistry and Biophysics and Molecular and Cellular Biochemistry, and is currently a member of the editorial boards of Advances in Biochemistry in Health and Disease and Recent Patents on Endocrine, Metabolic and Immune Drug Discovery. Dr. Srivastava is also on the grant review panels of the Canadian Institutes of Health Research, the Heart and Stroke Foundation of Canada and the National Institutes of Health. He has also organized several International symposia and workshops on Second Messengers and cell signaling.