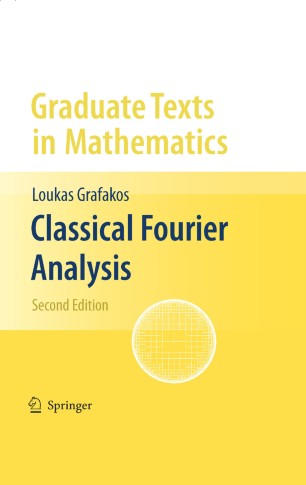 The primary goal of these two volumes is to present the theoretical foundation of the field of Euclidean Harmonic analysis. The original edition was published as a single volume, but due to its size, scope, and the addition of new material, the second edition consists of two volumes. The present edition contains a new chapter on time-frequency analysis and the Carleson-Hunt theorem. The first volume contains the classical topics such as Interpolation, Fourier Series, the Fourier Transform, Maximal Functions, Singular Integrals, and Littlewood-Paley Theory. The second volume contains more recent topics such as Function Spaces, Atomic Decompositions, Singular Integrals of Nonconvolution Type, and Weighted Inequalities.

These volumes are mainly addressed to graduate students in mathematics and are designed for a two-course sequence on the subject with additional material included for reference. The prerequisites for the first volume are satisfactory completion of courses in real and complex variables. The second volume assumes material from the first. This book is intended to present the selected topics in depth and stimulate further study. Although the emphasis falls on real variable methods in Euclidean spaces, a chapter is devoted to the fundamentals of analysis on the torus. This material is included for historical reasons, as the genesis of Fourier analysis can be found in trigonometric expansions of periodic functions in several variables.

About the first edition:

"Grafakos's book is very user-friendly with numerous examples illustrating the definitions and ideas... The treatment is thoroughly modern with free use of operators and functional analysis. Morever, unlike many authors, Grafakos has clearly spent a great deal of time preparing the exercises."