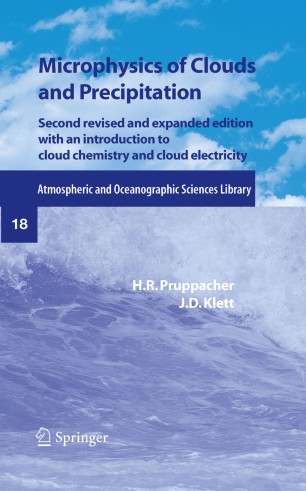 Microphysics of Clouds and Precipitation

Cloud physics has achieved such a voluminous literature over the past few decades that a significant quantitative study of the entire field would prove unwieldy. This book concentrates on one major aspect: cloud microphysics, which involves the processes that lead to the formation of individual cloud and precipitation particles. Common practice has shown that one may distinguish among the following addi­ tional major aspects: cloud dynamics, which is concerned with the physics respon­ sible for the macroscopic features of clouds; cloud electricity, which deals with the electrical structure of clouds and the electrification processes of cloud and precipi­ tation particles; and cloud optics and radar meteorology, which describe the effects of electromagnetic waves interacting with clouds and precipitation. Another field intimately related to cloud physics is atmospheric chemistry, which involves the chemical composition ofthe atmosphere and the life cycle and characteristics of its gaseous and particulate constituents. In view of the natural interdependence of the various aspects of cloud physics, the subject of microphysics cannot be discussed very meaningfully out of context. Therefore, we have found it necessary to touch briefly upon a few simple and basic concepts of cloud dynamics and thermodynamics, and to provide an account of the major characteristics of atmospheric aerosol particles. We have also included a separate chapter on some of the effects of electric fields and charges on the precipitation-forming processes.