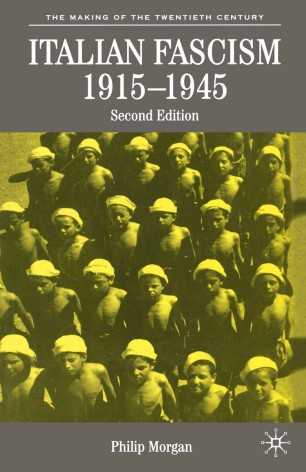 It is now 80 years since Mussolini's Fascism came to power in Italy, but the political heirs of the original Fascism are part of government in today's Italy. The resurgence of neo-fascist and neo-Nazi extremism all over Europe are a reminder of the continuing place of fascism in contemporary European society, despite its political and military defeat in 1945.
This thoroughly revised, updated and expanded edition provides a critical and comprehensive overview of the origins of Fascism and the movement's taking and consolidation of power. Philip Morgan:
· explains how the experience of the First World War created Fascism
· describes how the unsettled post-war conditions in Italy enabled an initially small group of political adventurers around Mussolini to build a large movement and take power in 1922
· focuses on the workings of the first ever 'totalitarian' system and its impacts on the lives and outlooks of ordinary Italians
· considers the meshing of internal 'fascistisation' and expansionism, which emerged most clearly after 1936 as Italy became more closely aligned with Nazi Germany
· examines the demise of Italian Fascism between 1943 and 1945 as Mussolini and his party became the puppets of Nazism
· provides an explanation and interpretation of Fascism, locating it in contemporary history and taking account of recent debates on the nature of the phenomenon.
Clear and approachable, this essential text is ideal for anyone interested in Italy's turbulent political history in the first half of the twentieth century.

PHILIP MORGAN is Senior Lecturer in Contemporary European History at the University of Hull. He is the author of Fascism in Europe, 1919-1995 (2000), and has written several articles on Italian Fascism.