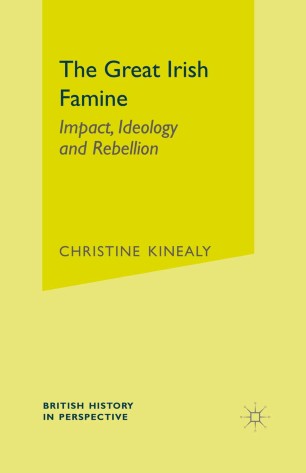 The Great Irish Famine of 1845-51 was both one of the most lethal famines in modern history and a watershed in the development of modern Ireland. This book - based on a wide range of little-used sources - demonstrates how the Famine profoundly affected many aspects of Irish life: the relationship between the churches; the nationalist movement; and the relationship with the monarchy. In addition to looking at the role of the government, Kinealy shows the importance of private charity in saving lives. One of the most challenging aspects of the publication is the chapter on food supply, in which Kinealy concludes that, despite the potato blight, Ireland was still producing enough food to feed its people. The long-term impact of the tragedy, notably the way in which it has been remembered and commemorated, is also examined.

CHRISTINE KINEALY is a graduate of Trinity College, Dublin, where she completed a PhD on the introduction of the Poor Law to Ireland, 1838-62. She is currently a Reader at the University of Central Lancashire and an Honorary Fellow of Liverpool University.