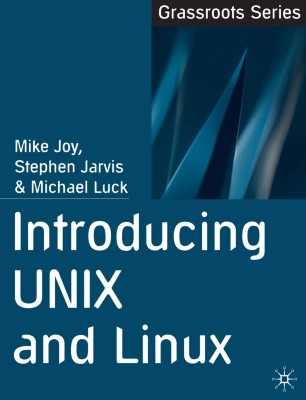 An introductory, tutorial style text covering the basics of UNIX and Linux for the complete beginner, this is a comprehensive and well written introduction to these operating systems. It assumes no prior knowledge of programming nor any experience of using computers. UNIX and Linux are two of the most commonly used operating systems within the educational and corporate worlds and are growing in popularity. This book covers all the basic constructs and commands of UNIX and follows the 1993 POSIX.2 International Standard.

MIKE JOY is a Senior Lecturer in Computer Science at Warwick University. He has taught UNIX for the past 10 years and his previous publications include Beginning Unix (ITP, 1995).

STEPHEN JARVIS is a Lecturer in Computer Science at Warwick University. He previously worked as a Lecturer at Oxford University and has taught modules in programming at both universities. His previous publications include Concurrent Systems (McGraw Hill, 1995).

MICHAEL LUCK is a Lecturer in Computer Science at Southampton University. He has taught introductory programming since 1993 and his previous publications include Understanding Agent Systems (Springer, 2001).