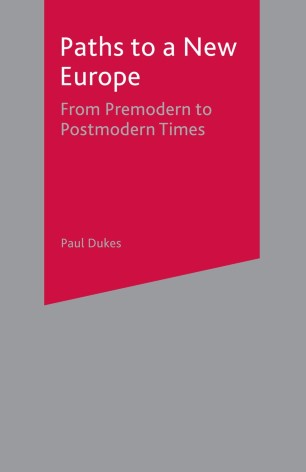 Paths to a New Europe

From Premodern to Postmodern Times

The development of Europe accelerated from the middle of the seventeenth century with the formation of the nation states and the growth of empires. By the beginning of the twentieth century, European empires dominated most of the world's surface - however, the two world wars brought the continent down from its peak of power. From 1945 to 1989, Europe lost its empires and fell under the influence of the two superpowers, the USA and the USSR; but with the decline and fall of the latter, Europe has since moved towards a new unity.

Paths to a New Europe considers the development of the continent from its origins through premodern to postmodern times, and provides a balanced treatment of Europe and of its wider global setting. Within the overall division of East and West Europe, each section is given due attention and Paul Dukes shows how cultural traditions, along with socio-economic differences and realignments of political power, have evolved over the centuries, still exerting influence as Europe moves towards unity after the collapse of the Eastern bloc and the end of the Cold War.

PAUL DUKES is Emeritus Professor of History at the University of Aberdeen. He has also held appointments with Washington, Maryland, Cornell and Auckland Universities.