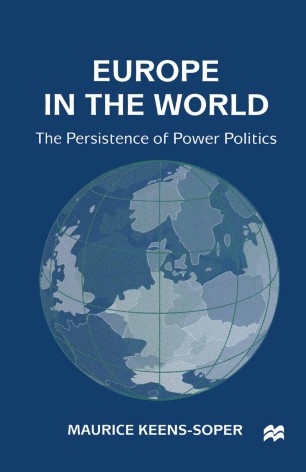 Europe in the World

The Persistence of Power Politics

Preoccupation with the EU's internal affairs risks ignoring the extent to which Europe itself will now be shaped by foreign affairs. The future of Europe lies in its own hands only if it organizes itself to adjust to events in a world diplomatic system over which it can hope to have only limited control. The global setting in which Europe will have to find a place is the reverse image of its post-1945 direction. Whereas Western Europe's states have renounced 'power politics' among themselves, the rest of the world has done no such thing. The basis of inter-state relations remains remarkably similar to Rousseau's description as the 'constant action and reaction of powers in continued agitation'. Failure to recognize the persistence of power politics is now among the principal obstacles to Europe's future. It is as if recovery from the nemesis of mid-century has produced hubris towards its end. Europe finds it hard to accept that it must coexist with the outside world on terms increasingly set not by its own virtuous example of reconciliation among old enemies and the creation of political union, but by states who see little reason to follow its example. More fundamental than blueprints and policies for European Monetary Union and the European Union enlargement, Europe needs a trustworthy grasp of the world's foreign affairs to which its diplomacy must apply and its statecraft contribute.