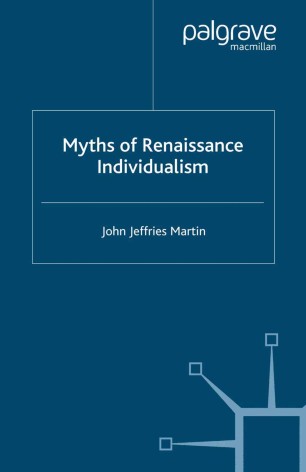 The idea that the Renaissance witnessed the emergence of the modern individual remains a powerful myth. In this important new book Martin examines the Renaissance self with attention to both social history and literary theory and offers a new typology of Renaissance selfhood which was at once collective, performative and porous. At the same time, he stresses the layered qualities of the Renaissance self and the salient role of interiority and notions of inwardness in the shaping of identity. Myths of Renaissance Individualism , in short, will interest students not only of history but also of art history, literature, music, philosophy, psychology and religion.

JOHN JEFFRIES MARTIN is Chair and Professor of History at Trinity University. He is the author of Venice's Hidden Enemies: Italian Heretics in a Renaissance City, editor of The Renaissance: Italy and Abroad; and co-editor (with Dennis Romano) of Venice Reconsidered: The History and Civilisation of an Itlian City-State.

'Myths of Renaissance Individualism gently but firmly cuts away the worst excesses of the postmodern critique of Renaissance identities. Suggesting some useful ways of rethinking the history of the self more broadly, Martin cogently asserts that Renaissance individualism must be studied in terms of Renaissance ideas. Using a mix of confessional literature and archival material, the author brilliantly draws from the essential 'I believe' of such documentation a vision of how humanists, intellectuals and everyday people viewed and understood themselves in this fascinating era. ' - Guido Ruggiero, University of Miami, USA

'John Martin's engaging discourse on how Renaissance men and women actually understood themselves disputes our traditional notions of Renaissance individualism in an erudite and compelling manner. With documentary, literary, and visual evidence, Martin convincingly posits that the Renaissance self was formed by an enigmatic and changeable relationship between interior and exterior identity, a relationship that can only be understood through close attention to its particular historical context. In doing so, he provides us with a provocative new way to understand the Renaissance and its relationship (or lack thereof) to our modern world' - Professor Jacqueline Marie Musacchio, Vassar College, author of The Art and Ritual of Childbirth in Renaissance Italy (1999)

'Martin's contribution to the much debated question of Renaissance individualism will be enormously stimulating to all students of the period.' - Peter Humfrey, Professor of Art History, University of St Andrews, UK

'This is a major contribution to the study of Renaissance individualism. John Jeffries Martin offers a lively and readable revisionist account, which suggests that rather than being either autonomous or constructed, the Renaissance self is relational. Building from primarily Italian examples, Martin's study will be essential reading for all students of Renaissance culture and ideology.' - Dr Richard D. Brown, Department of Literature, The Open University

'Beautifully written, richly documented, and philosophically nuanced, John J. Martin's Myths of Renaissance Individualism sets a new standard in the field of Renaissance studies...Martin explodes the anachronistic stereotypes of previous generations of scholarship concerning the Renaissance individual, and gives us a much-needed map of the frontiers of the early modern self.' - Professor Jon R. Snyder, University of California, Santa Barbara, USA