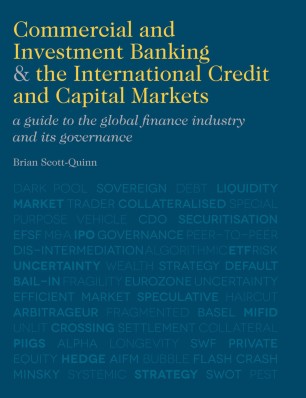 A Guide to the Global Finance Industry and its Governance

An introductory guide to finance and the financial markets, designed to help professionals and students understand the complex finance industry. It is a modern text that covers all major developments in markets in the period since the year 2000, the beginning of the global financial, eurozone and US government debt crises, up to the start of 2012.

PROFESSOR BRIAN SCOTT-QUINN Chairman of the ICMA Centre for financial markets at Henley Business School, UK, & Director of Banking and Insurance Programmes. He worked in the fields of investment banking, trading, asset management, and stock broking prior to founding the ICMA Centre as a specialist university finance school. His career in the City of London started as a trainee with the merchant bank, Hill Samuel. He then became a fixed income analyst with Kidder Peabody Securities Ltd. Along with three others he was a founder of Ross and Partners Securities Ltd - a privately owned international bond trading house. After negotiating the sale of Ross & Partners to Drexel Burnham Inc. he became finance director of Drexel Burnham Lambert Securities Ltd responsible for funding and risk management. He then moved to Security Pacific Bank (now part of Bank of America Merrill Lynch), a Californian bank with an office in London. Initially a portfolio strategist he subsequently became strategy advisor to the Group CEO, working on issues relating to the commercial bank, the securities trading operation and the stock broker Hoare Govett. In 1995 the International Capital Market Association voted to allocate £3 million from their capital account to constructing a purpose-designed building to house the new ICMA centre. ICMA has since donated a further £5 million to the university which enabled the construction of a second facility that includes someone hundredThompson Reuters terminals with associated trading, valuation and asset management software. He was Director of the Centre from the time he founded it until 2006 when he took up the newly created post of Chairman. Today, the ICMA Centre is one of the largest university finance schools in Europe and is part of the triple-accredited (AMBA, EQUIS and AACSB) Henley Business School, the UK's oldest business school which is home to some 7,000 students from over 140 countries from Africa to Asia, South America to Europe.
His main areas of consulting, executive education and research are: strategy in the financial services industry, banking, wealth and asset management and trading systems. He has been a consultant to, amongst others, Westpac Bank, NM Rothschild, Canada Life Insurance, Australian Mutual Provident (AMP), Investec Bank, the London Stock Exchange and SWX Europe (the Swiss exchange). He was a member of the Financial Services Authority (FSA) industry working group on Secondary Bond Market Transparency. He has been a consultant to the US Treasury and to a central bank and in 1978/9 was a monetary policy advisor to Mrs Thatcher's first Chancellor of the Exchequer (finance minister), Lord Howe of Aberavon (Sir Geoffrey Howe). He is also a Director of the holding company for LendLoanInvest.co.uk, a peer to peer social lending website.