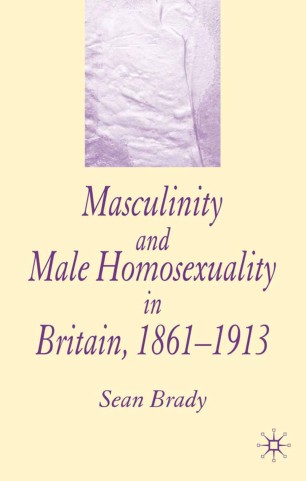 Masculinity and Male Homosexuality in Britain, 1861–1913

This book is part of a new generation of historical research that challenges prevailing arguments for the medical and legal construction of male homosexual identities in late nineteenth and early twentieth-century Britain. British society could not tolerate the discussion necessary to form medical or legal concepts of 'the homosexual'. The development of masculinity as a social status is examined, for its influence in shaping societal attitudes towards sex and sexuality between men and fostering resistance to any kind of recognition of these phenomena. Imperatives to bolster masculinity as a social status precluded public recognition of the existence of sex and sexuality between men, even in terms that were hostile and pejorative.

SEAN BRADY is Lecturer in Modern British History at Birkbeck College, University of London, UK. He is convening editor for Palgrave Macmillan's series Genders and Sexualities in History.

'A masterful history. Sean Brady has something new and provocative to say about the history of homosexuality in Britain. It promises to become a must-read for historians, students, and anyone curious about nineteenth-century sexuality.' - Professor Joanna Bourke, Birkbeck College, UK

'It is hard to think of a work which does more to undermine Michel Foucault's influential propositions about the history of homosexuality as applied to Britain: a notable achievement.' - John Tosh, Professor of History, Roehampton University, UK

'Provocative and elegantly argued...Brady represents a new generation of scholarship and it will be exciting to see if other scholars follow his lead.' - Julie Ann Taddeo, Victorian Studies

'In this book Sean Brady has made a valuable contribution to scholarship on masculinity and homosexuality in the late nineteenth and early twentieth centuries. Brady presents probably the most empirically comprehensive critique to date of the applicability in Britain of Foucault's challenge to the repressive hypothesis, and his conception of homosexual identity shaped through 'reverse discourse'. What emerges is a very useful counterweight to the work of Weeks and others, an incisive text demonstrating critical thinking, which should be valued by those working in the field.' - Matthew Waites, Men and Masculinities