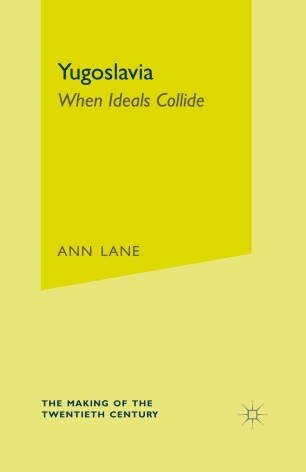 Yugoslavia was a phenomenon of the 'short' twentieth century. Its two incarnations fell between the cataclysm of the First World War which destroyed the old order, and the transformation of Europe which followed the collapse of communism in 1989. The task of building a viable, unified state was complicated not only by Yugoslavia's diverse cultural composition, but also by the pressures which the evolution of international society have placed on the modern state.

Yugoslavia
- explains and examines the key themes in the history of the former Yugoslavia
- synthesises the main strands in contemporary debate about the origins of the Yugoslav crisis
- presents a truly international history, exposing in full the role played by other countries in the rise and fall of the nation

Focussing on both domestic and external factors, Ann Lane presents a balanced analysis of this ultimately failed attempt at state-building in a region of cultural diversity.

ANN LANE is Senior Lecturer in Defence Studies at King's College London, based at the Joint Services Command and Staff College in Watchfield.