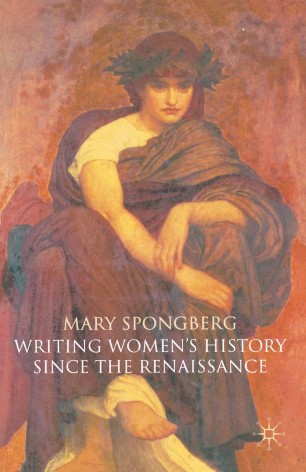 Writing Women’s History since the Renaissance

The complaint of Catherine Morland in Jane Austen's Northanger Abbey, that history has 'hardly any women at all' is not an uncommon one. Yet there is evidence to suggest that women have engaged in historical writing since ancient times.

Writing Women's History since the Renaissance also examines the relationship between women's history and the development of feminist consciousness, suggesting that the study of history has alerted women to their unequal status and enabled them to use history to achieve women's rights. Whether feminist or anti-feminist, women who have had their historical writings published have served as role models for women seeking a voice in the public sphere and have been instrumental in encouraging the growth of a feminist discourse.

MARY SPONGBERG is Senior Lecturer in Modern History at Macquarie University, Sydney, Australia. She is the author of Feminizing Venereal Disease (Macmillan, 1997), which was short-listed for the Premier's History Prize.