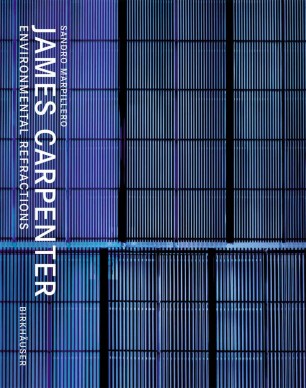 Iron filings under the influence of a magnetic field. The appearance of James Carpenter’s work is serene. It gives the impression, however, that _ something new will happen amidst its supposed serenity, and that other forces apart from those _ already apparent are about to enter its field. The work produces an inhabited depth, by shifting emphasis away from the visual registers of perception, towards multiple engagements of a subject, her/his spatial constructs, and their resulting environment. Carpenter addresses the object of perception not only by positioning it within cultural and economic contexts, but also by inscribing it into biological and ecological systems. His work challenges a conventional description of its forms, which also implicates the techniques through which architecture organizes the disciplinary controls of that which exceeds its limits. The interaction between the visual and bodily dimensions of Carpenter’s work promotes an approach to architecture that I will call “environmental. ” The production of a vast array of interfer- _ ences destabilizes the aesthetic autonomy of its objects of perception an autonomy that has persisted as one of the enduring myths of architecture. His concerns also highlight the idea that addressing sustainable resources should not remain narrowly focused on conventional notions of building technology, nor limit that focus to the performance of some materials.