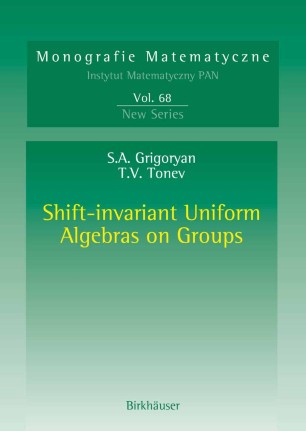 Shift-invariant algebras are uniform algebras of continuous functions de?ned on compactconnectedgroups,thatareinvariantundershiftsbygroupelements. They areoutgrowths of generalized analytic functions, introduced almost ?fty yearsago by Arens and Singer, and are the central object of this book. Associated algebras of almost periodic functions of real variables and of bounded analytic functions on the unit disc are also considered and carried along within the shift-invariant framework. The adopted general approach leads to non-standard perspectives, never-asked-before questions, and unexpected properties. Thebookisbasedmainlyonourquiterecent,someevenunpublished,results. Most of its basic notions and ideas originate in [T2]. Their further development, however, can be found in journal or preprint form only. Basic terminologyand standard properties of uniform algebrasarepresented in Chapter 1. Associated algebras, such as Bourgain algebras, polynomial ext- sions, and inductive limit algebras are introduced and discussed. At the end of the chapter we present recently found conditions for a mapping between uniform algebras to be an algebraic isomorphism. In Chapter 2 we give fundamentals, v- ious descriptions and standard properties of three classical families of functions – p almost periodic functions of real variables, harmonic functions, andH -functions on the unit circle. Later on, in Chapter 7, we return to some of these families and extend them to arbitrary compact groups. Chapter 3 is a survey of basic prop- ties of topological groups, their characters, dual groups, functions and measures on them. We introduce also the instrumental for the sequel notion of weak and strong hull of a semigroup.

"…this book will be useful for a wide range of analysts: the first chapters introduce basic tools of classical analysis (harmonic functions, almost periodic functions), of uniform algebras, of abstract harmonic analysis, and will be useful for beginning graduate students; the more advanced parts will interest research mathematicians and graduate students."   —Zentralblatt MATH