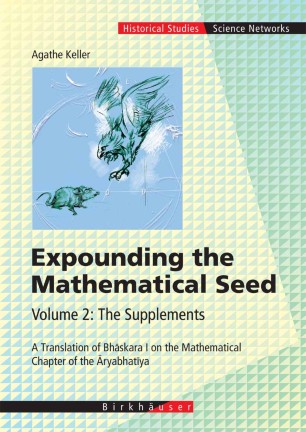 In the 5th century the Indian mathematician Aryabhata (476-499) wrote a small but famous work on astronomy, the Aryabhatiya. This treatise, written in 118 verses, gives in its second chapter a summary of Hindu mathematics up to that time. Two hundred years later, an Indian astronomer called Bhaskara glossed this mathematial chapter of the Aryabhatiya.

An english translation of Bhaskara’s commentary and a mathematical supplement are presented in two volumes.

Subjects treated in Bhaskara’s commentary range from computing the volume of an equilateral tetrahedron to the interest on a loaned capital, from computations on series to an elaborate process to solve a Diophantine equation.

This volume contains explanations for each verse commentary translated in Volume 1. These supplements discuss the linguistic and mathematical matters exposed by the commentator. Particularly helpful for readers are an appendix on Indian astronomy, elaborate glossaries, and an extensive bibliography.