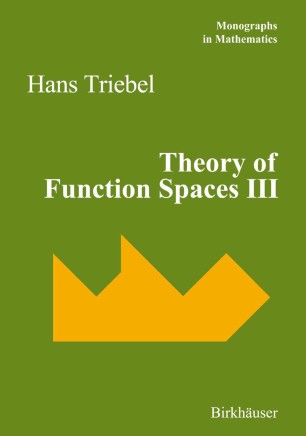 Part of the Monographs in Mathematics book series (MMA, volume 100)

This book deals with the recent theory of function spaces as it stands now. Special attention is paid to some developments in the last 10–15 years which are closely related to the nowadays numerous applications of the theory of function spaces to some neighbouring areas such as numerics, signal processing and fractal analysis. In particular, typical building blocks as (non-smooth) atoms, quarks, wavelet bases and wavelet frames are discussed in detail and applied afterwards to some outstanding problems of the recent theory of function spaces such as a local smoothness theory, fractal measures, fractal analysis, spaces on Lipschitz domains and on quasi-metric spaces.

The book is essentially self-contained, although it might also be considered as the continuation of the two previous books of the author with the same title which appeared as volumes 78 and 84 in this book series. It is directed to mathematicians working in analysis, numerics and fractal geometry, and to (theoretical) physicists interested in related subjects such as signal processing.

"This book can be considered the third volume in an impressive series of books on theory of function spaces…but at the same time it is quite self-contained…The book is…extremely well-written, and reader-friendly, and it contains an enormous amount of deep and interesting material. It is strongly recommended to anybody interested in function spaces or in any of the related areas."   —Mathematical Reviews

“This book is the third part in a famous series of books on the theory of function spaces by the same author. … After an intriguing historical survey in the introductory chapter, the book presents thorough discussions of typical building blocks as non-smooth atoms, quarks, wavelet bases, and wavelet frames. … The current volume is an impressive and comprehensive account of the state of the art and can to a large extent be read independently … .” (G. Hörmann, Monatshefte für Mathematik, Vol. 155 (2), October, 2008)