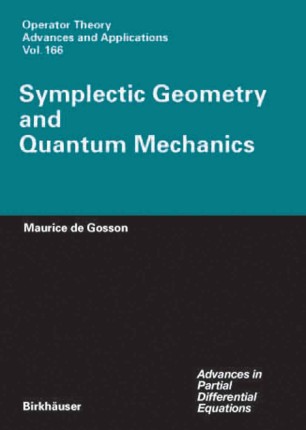 This book is devoted to a rather complete discussion of techniques and topics intervening in the mathematical treatment of quantum and semi-classical mechanics. It starts with a  rigorous presentation of the basics of symplectic geometry and of its multiply-oriented extension. Further chapters concentrate on Lagrangian manifolds, Weyl operators and the Wigner-Moyal transform as well as on metaplectic groups and Maslov indices. Thus the keys for the mathematical description of quantum mechanics in phase space are discussed. They are followed by a rigorous geometrical treatment of the uncertainty principle. Then Hilbert-Schmidt and trace-class operators are exposed in order to treat density matrices. In the last chapter the Weyl pseudo-differential calculus is extended to phase space in order to derive a Schrödinger equation in phase space whose solutions are related to those of the usual Schrödinger equation by a wave-packet transform.

The text is essentially self-contained and can be used as basis for graduate courses. Many topics are of genuine interest for pure mathematicians working in geometry and topology.