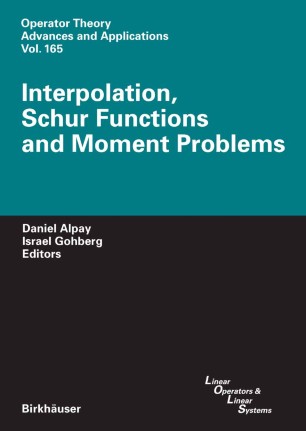 Schur analysis originates with an 1917 article of Schur where he associated to a function, which is analytic and contractive in the open unit disk, a sequence, finite or infinite, of numbers in the open unit disk, called Schur coefficients. In signal processing, they are often named reflection coefficients. Under the word "Schur analysis" one encounters a variety of problems related to Schur functions, such as interpolation problems, moment problems, the study of the relationships between the Schur coefficients and the properties of the function, or the study of underlying operators. Such questions are also considered for some generalizations of Schur functions. Furthermore, there is an extension of the notion of a Schur function for functions that are analytic and have a positive real part in the open upper half-plane; these functions are called Carathéodory functions.

This volume is almost entirely dedicated to the analysis of Schur and Carathéodory functions and to the solutions of problems for these classes.