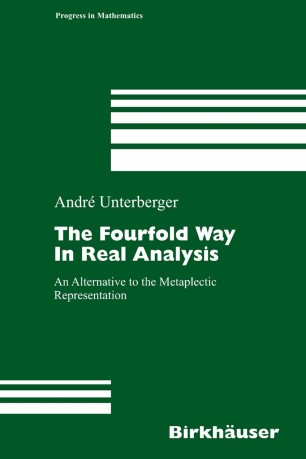 The Fourfold Way In Real Analysis

An Alternative to the Metaplectic Representation

Part of the Progress in Mathematics book series (PM, volume 250)

The fourfold way starts with the consideration of entire functions of one variable satisfying specific estimates at infinity, both on the real line and the pure imaginary line. A major part of classical analysis, mainly that which deals with Fourier analysis and related concepts, can then be given a parameter-dependent analogue. The parameter is some real number modulo 2, the classical case being obtained when it is an integer. The space L2(R) has to give way to a pseudo-Hilbert space, on which a new translation-invariant integral still exists. All this extends to the n-dimensional case, and in the alternative to the metaplectic representation so obtained, it is the space of Lagrangian subspaces of R2n that plays the usual role of the complex Siegel domain. In fourfold analysis, the spectrum of the harmonic oscillator can be an arbitrary class modulo the integers.

Even though the whole development touches upon notions of representation theory, pseudodifferential operator theory, and algebraic geometry, it remains completely elementary in all these aspects. The book should be of interest to researchers working in analysis in general, in harmonic analysis, or in mathematical physics.