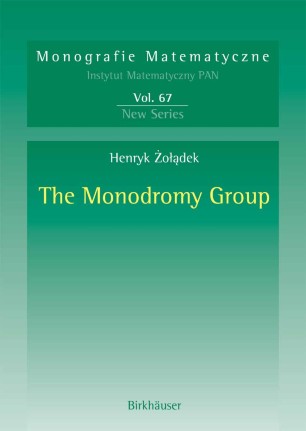 In singularity theory and algebraic geometry the monodromy group is embodied in the Picard-Lefschetz formula and the Picard-Fuchs equations. It has applications in the weakened 16th Hilbert problem and in mixed Hodge structures. In the theory of systems of linear differential equations one has the Riemann-Hilbert problem, the Stokes phenomena and the hypergeometric functions with their multidimensional generalizations. In the theory of homomorphic foliations there appear the Ecalle-Voronin-Martinet-Ramis moduli. On the other hand, there is a deep connection of monodromy theory with Galois theory of differential equations and algebraic functions. All this is presented in this book, underlining the unifying role of the monodromy group.

The material is addressed to a wide audience, ranging from specialists in the theory of ordinary differential equations to algebraic geometers. The book contains a lot of results which are usually spread in many sources. Readers can quickly get introduced to modern and vital mathematical theories, such as singularity theory, analytic theory of ordinary differential equations, holomorphic foliations, Galois theory, and parts of algebraic geometry, without searching in vast literature.