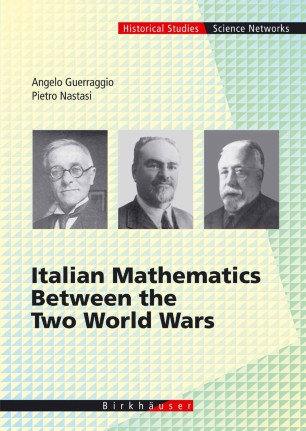 This book describes Italian mathematics in the period between the two World Wars. We analyze its development by focusing on both the interior and the external influences. Italian mathematics in that period was shaped by a colorful array of strong personalities who concentrated their efforts on a select number of fields and won international recognition and respect in an incredibly short time. Consequently, Italy was considered a third "mathematical power" after France and Germany, and qualified Italian universities became indispensable stops on the "tour", organized for the improvement of young foreign mathematicians. In the 1930s Italian mathematics had to face the increasing growth of other countries' mathematics, which forced consideration of new mathematical topics. This comparison between the interior and exterior perspective makes this history particularly compelling. At that time, Italy was also dominated by a fascist regime. This political situation and the social and academic structure of Italian society are included in the analysis as influences external to mathematics itself. The authors have provided a fascinating study of a most difficult time in the history of the world and of mathematics.

“What the book conveys is the richness of Italian mathematics throughout the period and, despite being expert in none of these fields, the authors captured my imagination and made me want to know more of such mathematical ideas … immensely enjoyable for all that.”(MAA REVIEWS)