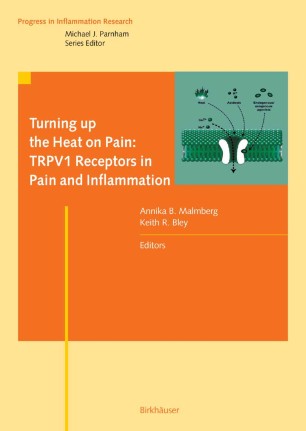 Turning up the Heat on Pain: TRPV1 Receptors in Pain and Inflammation

Despite tremendous advances in the understanding of the sensory nervous system which have accompanied the recent explosive growth of the neurosciences, rema- ably few innovative medicines directed towards pain and inflammation are ava- able. Indeed, many patients are still prescribed analgesic and anti-inflammatory medications that were identified long ago as components of herbal remedies. Si- larly, potential new medicines in clinical evaluation based on capsaicin and the c- saicin receptor are both grounded firmly on folk traditions and yet rely upon the most contemporary techniques of drug discovery and delivery. The first formal report of the pain-relieving properties of capsaicin appeared in 1850 [1]. However, for centuries before this, capsaicin-containing extracts had been used as folk medicines in cultures with access to pepper plants, much in the same way as poppy or willow-bark extracts were. Despite widespread use, it was not until 1878 that the selective action of capsaicin on the sensory nervous system was r- ognized [2]. In Chapter 1 of this volume, Janos Szolcsányi reviews this early research, which culminated with the seminal studies of Nicholas Jansco and his c- leagues in Hungary in the 1940s. Since then, capsaicin and related vanilloid c- pounds have played a prominent role in analgesia and inflammation investigations because of their ability to selectively activate a subpopulation of sensory neurons and produce sensations of pain and localized erythema.