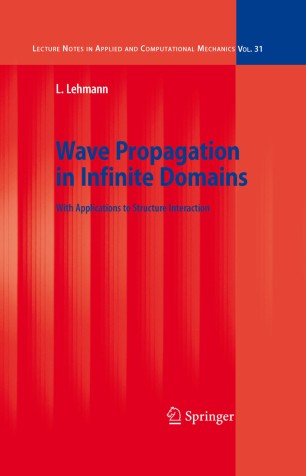 With Applications to Structure Interaction

Wave propagation in infinite or unbounded domains is often encountered in scientific and engineering applications. Theoretical fundamentals and applications of a new numerical model which has the ability to simulate such wave propagation are presented. Attention is focused on linear waves in ideal fluids and elastic domains. Wave propagation based on scalar and vector wave equations, as well as fluid-structure interaction and soil-structure interaction is numerical simulated. The model is based on a coupled finite element/scaled boundary finite element method (FEM/SBFEM). While the FEM maps the near-field, under the immense variety of non-reflecting boundary conditions the SBFEM, developed by Wolf and Song, was chosen. It has some unique features: reduction of the spatial dimension by one without requiring a fundamental solution, no discretisation of free and fixed boundaries and interfaces between different materials, and influence of the infinite far-field could be stored in the form of matrices for further simulations (e.g., different load cases). Benchmark examples show the efficiency and accuracy of the proposed algorithm. Finally, covered fields of applications are: acoustics, dynamic behaviour of offshore wind turbines, and seismic analysis of buildings including soil-structure interaction.