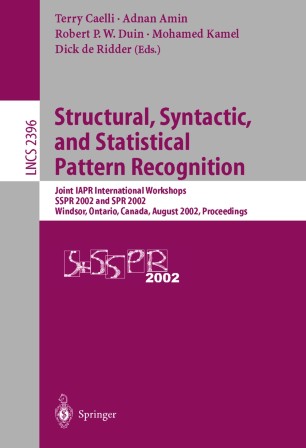 This volume contains all papers presented at SSPR 2002 and SPR 2002 hosted by the University of Windsor, Windsor, Ontario, Canada, August 6-9, 2002. This was the third time these two workshops were held back-to-back. SSPR was the ninth International Workshop on Structural and Syntactic Pattern Recognition and the SPR was the fourth International Workshop on Statis- cal Techniques in Pattern Recognition. These workshops have traditionally been held in conjunction with ICPR (International Conference on Pattern Recog- tion), and are the major events for technical committees TC2 and TC1, resp- tively, of the International Association of Pattern Recognition (IAPR). The workshops were held in parallel and closely coordinated. This was an attempt to resolve the dilemma of how to deal, in the light of the progressive specialization of pattern recognition, with the need for narrow-focus workshops without further fragmenting the ?eld and introducing yet another conference that would compete for the time and resources of potential participants. A total of 116 papers were received from many countries with the submission and reviewingprocesses beingcarried out separately for each workshop. A total of 45 papers were accepted for oral presentation and 35 for posters. In addition four invited speakers presented informative talks and overviews of their research. They were: Tom Dietterich, Oregon State University, USA Sven Dickinson, the University of Toronto, Canada Edwin Hancock, University of York, UK Anil Jain, Michigan State University, USA SSPR 2002 and SPR 2002 were sponsored by the IAPR and the University of Windsor.