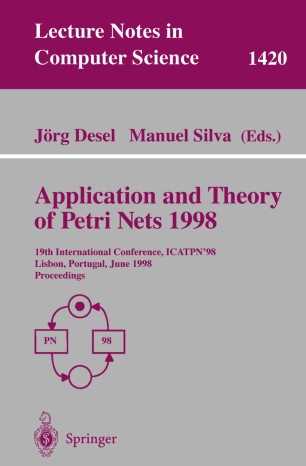 Application and Theory of Petri Nets 1998

This volume contains the proceedings of the 19th annual International Conference on Application and Theory of Petri Nets. The aim of the Petri net conference is to create a forum for the dissemination of the latest results in the application and theory of Petri nets. It always takes place in the last week of June. Typically there are 150 - 200 participants. About one third of these come from industry while the rest are from universities and research institutions. The conferences and a number of other activities are coordinated by a steering committee with the following members: G. Balbo (Italy), J. Billington (Australia), G. DeMichelis(Italy),C. Girault(France),K. Jensen (Denmark), S. Kumagai (Japan), T. Murata (USA), C. A. Petri (Germany; honorary member), W. Reisig (Germany), G. Roucairol (France), G. Rozenberg (The Netherlands; chairman), M. Silva (Spain). The 19th conference has been organized for the rst time in Portugal, by the Department of Electrical Engineering of the Faculty of Sciences and Technology of the New University of Lisbon, together with the Center for Intelligent Robotics of UNINOVA. It takes place in Lisbon at the same time as EXPO’98, the last world exhibition of the 20th century.