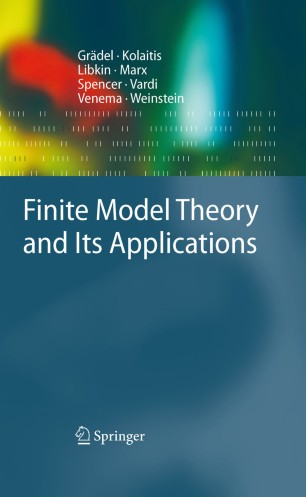 Finite Model Theory and Its Applications

This book gives a broad overview of core topics of finite model theory: expressive power, descriptive complexity, and zero-one laws, together with selected applications to database theory and artificial intelligence, especially, constraint databases and constraint satisfaction problems. The final chapter provides a concise modern introduction to modal logic, which emphasizes the continuity in spirit and technique with finite model theory. This underlying spirit involves the use of various fragments of, and hierarchies within, first order, second order, fixed point, and infinitary logics to gain insight into phenomena in complexity theory and combinatorics.

The book emphasizes the use of combinatorial games, such as extensions and refinements of the Ehrenfeucht-Fraissé pebble game, as a powerful technique for analyzing the expressive power of such logics, and illustrates how deep notions from model theory and combinatorics, such as o-minimality and tree-width, arise naturally in the application of finite model theory to database theory and AI. Students of logic and computer science will find here the tools necessary to embark on research in finite model theory, and all readers will experience the excitement of a vibrant area of application of logic to computer science.

Erich Graedel is a Professor of Mathematical Foundations of Computer Science at the University of Technology Aachen.  His research interests include algorithms, complexity, and logic in computer science.

Leonid Libkin received his PhD from the University of Pennsylvania and is currently Professor of Computer Science at the University of Toronto. His main research interests include databases and applications of logic in computer science.

Maarten Marx is an associate professor at the Vrije Universiteit Amsterdam. His research interests are in modal and algebraic logic.

Moshe Y. Vardi is a Noah Harding Professor of Computer Science and Chair of Computer Science at Rice University. Prior to joining Rice in 1993, he was at the IBM Almaden Research Center, where he managed the Mathematics and Related Computer Science Department. His research interests include database systems, computational-complexity theory, multi-agent systems, and design specification and verification. Vardi received his Ph.D. from the Hebrew University of Jerusalem in 1981. He is the author and co-author of over 120 technical papers, as well as a book titled "Reasoning about Knowledge". Vardi is the recipient of 3 IBM Outstanding Innovation Awards. He is an editor of several international journals and is a Fellow of the Association of Computing Machinery.

Yde Venema studied mathematics; in 1992, he received a PhD in Logic with the dissertation `Many-Dimensional Modal Logic'. He is currently a Research Fellow of the Royal Netherlands Academy of Arts and Sciences and an assistant professor at the Institute for Logic, Language and Computation of the University of Amsterdam. His research interests include modal and temporal logic, algebraic logic, and applications of logic in linguistics and computer science.

Scott Weinstein is Professor of Computer Science, Mathematics, and Philosophy at the University of Pennsylvania. His research interests include logic in computer science and the philosphy of mathematics.

"This book has its origins in a workshop held in Philadelphia in 1999 … . The chapters are of an expository nature, each one providing an excellent starting point to explore the research literature in the relevant topic. … I found it to be a more accessible introduction to the subject … and a useful starting point for graduate students entering the subject. … This will appeal … to those readers trained in classical traditions of logic who wish to approach the subject." (Anuj Dawar, Mathematical Reviews, Issue 2009 i)