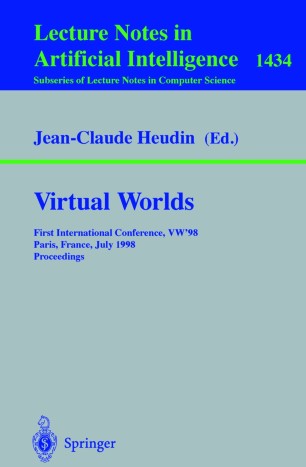 1 Introduction Imagine a virtual world with digital creatures that looks like real life, sounds like real life, and even feels like real life. Imagine a virtual world not only with nice three dimensional graphics and animations, but also with realistic physical laws and forces. This virtual world could be familiar, reproducing some parts of our reality, or unfa miliar, with strange “physical” laws and artificial life forms. As a researcher interested in the sciences of complexity, the idea of a conference about virtual worlds emerged from frustration. In the last few years, there has been an increasing interest in the design of artificial environments using image synthesis and virtual reality. The emergence of industry standards such as VRML [1] is an illustra tion of this growing interest. At the same time, the field of Artificial Life has ad dressed and modeled complex phenomena such as self organization, reproduction, development, and evolution of artificial life like systems [2]. One of the most popular works in this field has been Tierra designed by Tom Ray: an environment producing synthetic organisms based on a computer metaphor of organic life in which CPU time is the “energy” resource and memory is the “material” resource [3]. Memory is or ganized into informational patterns that exploit CPU time for self replication. Muta tion generates new forms, and evolution proceeds by natural selection as different creatures compete for CPU time and memory space.