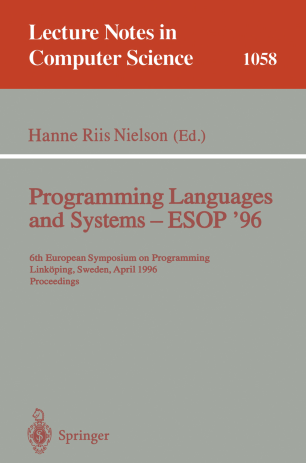 This book presents the refereed proceedings of the Sixth European Symposium on Programming, ESOP '96, held in Linköping, Sweden, in April 1996.
The 23 revised full papers included were selected from a total of 63 submissions; also included are invited papers by Cliff B. Jones and by Simon L. Peyton Jones. The book is devoted to fundamental issues in the specification, analysis, and implementation of programming languages and systems; the emphasis is on research issues bridging the gap between theory and practice. Among the topics addressed are software specification and verification, programming paradigms, program semantics, advanced type systems, program analysis, program transformation, and implementation techniques.