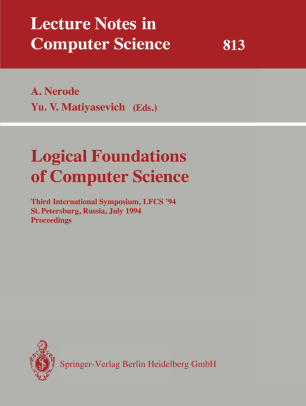 This volume presents the refereed papers accepted for the international symposium Logical Foundations of Computer Science '94, Logic at St. Petersburg, held in St. Petersburg, Russia in July 1994. The symposium was the third in a series of joint efforts of logicians from both the former Soviet Union and the West.
The volume reflects that the interaction of logic and computer science is an especially fertile ground for interdisciplinary work providing mutual understanding and benefits. The totally 35 papers are devoted to topics as linear logic, Horn clauses, model-checking, lambda-calculi, modal logic, and problem complexity.